Bitcoin’s bubble potential suggests the need for caution – and regulation

Fear of missing out has led people to make all kinds of rash decisions, from an ill-advised trip to Vegas to a tattoo marking a friendship that quickly ran its course.

People hate to miss out and they love to blame “FOMO” for bad decisions, an impulse that is seldom more visible (or costly) than when it comes to investing with your emotions.

It’s also one of the reasons people often fall for bubbles or fad investing, jumping into areas they know little about and which may not fit their needs – often realizing their mistake only when it’s already too late.

“Bubbles are a lot like life’s greatest moments – you don’t really know they’re going on when you’re in the middle of them,” said Duncan Stewart, Director of Technology, Media and Telecommunications Research for Deloitte Canada in Toronto.

“It’s something you can figure out with a little bit of perspective.”

Bitcoin for the win?

In 2017, the “it” investment was undoubtedly bitcoin. Few people understood exactly what the cryptocurrency was or the implications of buying or trading tokens, yet seemed to be under the impression that buying in would transform them into Super Mario. On his best day. Running through a field of gold coins.

Yet in a few short months, exuberance turned to fear as helplines were set up for miners and bitcoiners suddenly wondering why their “investment” had lost more than half its value.

“Obviously, it grew extremely quickly and that usually is characteristic of a bubble itself,” said David Eason, Chief Executive Officer of Blockstation, a Toronto-based cryptocurrency exchange that works with traditional financial institutions, dealers and brokers.

“I think also (that) not understanding what it is has people referencing it as a bubble.”

While bitcoin saw a rapid rise, it hasn’t seen the same kind of decline as other traditional bubbles, he said, noting that this suggests a decrease in exuberance rather than a pop.

“Honestly, I think there needed to be (a decrease). It’s plateauing and people are now saying, what is this technology, what do we need to understand about it, and if there’s regulation coming in maybe I should wait,” he said.

Other analysts weren’t so kind.

A team of Bank of America Merrill Lynch researchers created a graph in April 2018 suggesting bitcoin was the biggest bubble in history because it had the greatest asset price appreciation by a significant margin – even when compared to gold, the Dutch tulip bubble of 1637, the 1929 market crash, the 1990s tech bubble, or the Mississippi Company bubble of 1720.

While the Dutch tulip bubble had tulip prices rising by about 40 times bitcoin was, at its peak, nearly 60 times more expensive than it had been three years earlier. 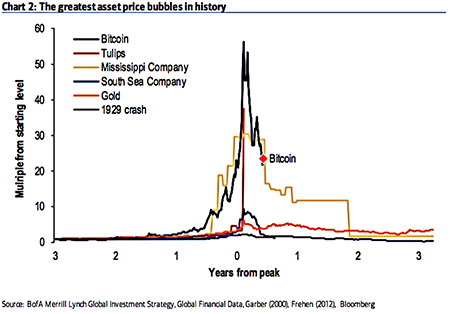 Barclays analysts, meanwhile, likened the spread of the bitcoin mania to an infectious disease.

That difference of opinion may partly be explained by understanding what type of asset bubble bitcoin could be.

Is it the type that happens when a large number of investors decide to, for instance, buy shares of technology companies, driving valuations too high? Or is it the kind of bubble that, when it pops, it never comes back?

If it’s the former, there may be a crash, but it won’t wipe out the sector. Tech stocks came down in price, but they haven’t gone away, and many went on to do quite well.

“The Internet became the ‘dot-com bubble’ in 2001, but few people would dismiss Amazon or Alibaba as insignificant today,” said Chris Allen, CEO of Jumpara, a digital media company in Toronto.

“It took 15 years for any potential value to be realized. There’s a good chance bitcoin and blockchain could follow a similar path.”

Bitcoin also requires a level of technological and financial literacy that makes it an asset class that’s difficult to understand.

“Now we’re contemplating a potential bubble called bitcoin or blockchain, the underpinnings of which require technical literacy (namely cryptography) that escapes most of the analysts who opine on it. That’s why venture capitalist billionaires like Peter Thiel say it’s not a bubble if you understand the math.”

So what’s a reasonable investor to do?

As with most investment decisions, it’s wise to take a breath and step away from the panic button and understand that markets always will rise and fall.”

Fear of missing out is strong, but jumping into an investment you don’t understand and is largely unregulated can have severe consequences.

The legendary investor Sir John Templeton repeatedly stressed the need for research when it came to picking stocks or other investments, as well as the importance of buying stocks at the lowest price in relation to value.

It’s hard to imagine a world in which he would have endorsed jumping into bitcoin at the height of its value because everyone else was making money off tokens.

Anyone wishing to get into the space should take the time to research who to work with and find the best way to test the waters with the least possible risk.

“The sector just isn’t mature enough necessarily (to) have the proper protections in place for consumers and investors being such a new technology,” said Eason, whose own exchange doesn’t take investors’ money directly but rather through pre-existing (and regulated) financial institutions.

“When it increases from a $20 billion to a $720 billion market cap people are willing to not focus on some of those challenges because they’re still making a lot of money.”

“As it becomes more stable in terms of price … regulators are really looking in at the space and saying, we need to understand this and we need to put some protections in place because there are none.”